Current functionality is designed around the way I myself play music, which is to say, a whole album at a time. In the future I may be willing to implement other use cases if people ask, but I get the impression that use of mpd on a Mac is at best an extremely niche proposition. The following instructions assume you have it installed and configured.

Trigger this workflow using the mpdalbum keyword (or assign it a hotkey). Alfred will scan your mpd database, and you can use Alfred's fuzzy matching to search for an album. When you select the album, if mpd is already playing, the selected album will be queued at the end of the playlist. Otherwise it will start playing immediately.

The workflow also includes the following features for music playback, which you should assign hotkeys to if you want to use them: * Toggle Play * Volume Up/Down (in increments of 10 within mpd's range from 0 to 100) * Show Current Song/Artist/Album/Time * Next/Previous Song * NEW in version 2.1: Find / Show Lyrics (see below)

You can modify the behavior of the workflow when you select an album using mpdalbum.

Shift will cause the album to be queued instead of played, regardless of whether mpd is currently playing.

Control will show the album's tracks in Alfred instead of playing the album. Selecting a track will behave as the Play/Queue hotkey above, but for the track. Control-selecting the track will play or queue the whole album. This lets you preview the tracks on an album before deciding to play it. Shift or Option-selecting a single track works as for albums, above.

The new command mpdlyrics will attempt to show the currently playing song's lyrics in large text. If the song has no lyrics attached to the file, it will attempt to search Genius.com for lyrics, add them to the file, and display them. In order to do this, you must do the following: * Set the GENIUS_ACCESS_TOKEN variable in the "Workflow Variables" section of this workflow (the [_x_]) icon in the upper right of the workflow editor. To get a token, sign up an API client with Genius.com here: [https://genius.com/api-clients] * Set up mpd to use a Unix socket for connections. You can do this by putting the line bind_to_address "~/.mpd/mpd.socket" in your mpd.conf (adjust this as necessary for where you put the rest of your mpd storage) and setting the workflow environment variable MPD_HOST to ~/.mpd/mpd.socket.

What's With The Large Text

Aside from playing or queueing an album or song, most actions will show large text. The problem with large text is that it's always as large as possible, which is sometimes very large indeed. In particular, the play/pause/stop emoji shown when you toggle play are colossal if shown alone and typically extremely pixelated. I padded them out to force them smaller; it's not a great solution but it's the best I could come up with.

If You Don't Have mpd Installed Already

You should be aware that using mpd instead of the Music app (née iTunes) to play music means circumventing the "(usually) just works" nature of Apple's default music player in the interest of maybe saving some memory and using some software that is in principle more narrowly focused on a single purpose. As a result, you'll probably be setting yourself up for a certain amount of frustration as you're forced to tinker with your non-standard setup. This route is not for everyone! On the other hand, this setup certainly allows for more tinkering than iTunes.

Personally, I don't use beets or ncmpcpp, which is why I wrote my own Alfred workflow rather than using the one linked in that post. I let Apple's Music app manage my music because trying to cut it out of my life entirely is too much for me (in particular I'm not interested in coming up with an alternative for syncing to a mobile device). But you can certainly just use the setup in that post if you prefer!

If you use Apple Lossless files, you might need to follow these instructions when you install mpd to make sure it works with them: http://onethingwell.org/post/16355956926/mpd-apple-lossless-os-x

This workflow uses the following Python libraries for its functionality. They're all included and don't need to be installed; this is just to give credit. 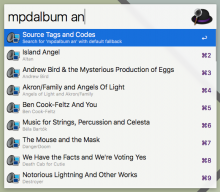