Search LastPass for usernames, sites and passwords
View on Github

Simple yet powerful integration with the Lastpass CLI so you can now get your passwords out of your Lastpass vault and straight into the clipboard from within Alfred.

Requires Alfred 3 or 4 and LastPass CLI v1.3 or higher

NOTE: This Alfred Workflow is not affiliated in any way with LastPass. The LastPass trademark and logo are owned by LastPass.com. The LastPass logo and product name have been used with permission of the LastPass team.

My thanks go out to LastPass for their awesome product and the new CLI! 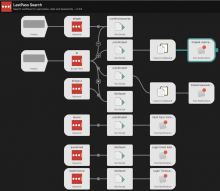